Committee member Barbara Abraham has been researching the history of a Belsize building too often taken for granted:

Howitt Close is a mansion block, in Art Deco style, that has nestled comfortably and rather unassumingly at the curved southern end of Howitt Road for almost a century. Last autumn a most unwelcome planning application to add a fourth storey and mansard roof brought it into the limelight.  The Belsize Conservation Area Statement of 2003 mentions Howitt Close as a building making a positive contribution to the special character and appearance of the conservation area but little other information about the flats was readily available. Establishing its heritage was important in opposing the planning application and so began a rather frantic search for historical information, which brought to light both Howitt Close’s significant architect and some interesting comparisons and contrasts with the Isokon Building. 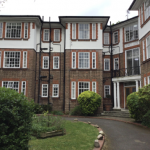 A careful look at Howitt Close reveals that it was designed with considerable architectural skill to suit its specific location. The L-shaped block of flats was evidently intended to make optimal use of the available space, but without dominating its prominent situation at the junction of Howitt Road and Glenilla Road. Aesthetically it was designed to blend with the earlier Edwardian terraced housing in the neighbourhood, whilst proclaiming its era of construction through its overall form and Art Deco flourishes. The building comprises two red brick storeys topped with a white roughcast one, with both the red brick and white roughcast mirroring the materials of the Edwardian houses across the street. The pale storey above two darker brick storeys appears to diminish the height of the block. “Setbacks” and tripartite main windows are used to divide it visually into vertical sections that approximate to the width of the houses in the vicinity so that, from afar, the mansion block can be mistaken for a terrace of houses.

A day spent in London Metropolitan Archives yielded some background information but not the date of construction of Howitt Close. But a visit to Camden Local Studies & Archives Centre proved more fruitful as one of the archivists unearthed a “Notice of new buildings, drainage works, and apparatus in connection therewith”, filed with the Borough of Hampstead in October 1932. The notice was signed by Henry F Webb & Ash, an architectural partnership that also owned the site.

Subsequent research established that the same partnership was responsible for the 1932 Ambassador Cinema at Hendon Central, and that Henry Frederick Webb (1879-1953) was the architect behind other significant north London buildings. He went on to design Elm Park Court, Pinner, constructed in 1936 and now Grade II listed. Elm Park Court is considered one of the icons of the modernism characteristic of 1930s “Metroland”, a form of modernism that owes more to Art Deco than to the later “brutalist” strand of modernism. Despite Elm Park Court’s very distinctive character, its Art Deco heritage is apparent and the development has a number of features reminiscent of Howitt Close.

Howitt Close was built 1932-1934 and the General Rate book for Belsize Ward shows that its 46 flats were fully tenanted at April 1934. Its construction dates between 1932 and 1934 mean that it was contemporaneous with the Grade I listed Isokon flats on Lawn Road. The Isokon design was developed 1929-1932 and the building was officially opened in July 1934, shortly after Howitt Close was first occupied. Volumes have been written about the Isokon flats: a project “to design an apartment building and its interior based on the principle of affordable, communal and well-designed inner-city living… aimed at intellectual, working middle class people” (https://www.ignant.com/2016/04/04/the-secret-history-of-londons-isokon-building). The Howitt Close flats were also intended to provide compact living spaces for the middle classes. The original plans for the building were titled “Proposed Block of Small Type Flats,” and it had a restaurant from the very beginning on the lower ground floor, whereas the famous Isobar restaurant in the Isokon building was not opened until 1937, when the block’s communal kitchen was converted into a restaurant. The impetus behind Howitt Close was similar to that of the Isokon building and, with its contrasting architectural style, it provides context for the modernist Isokon flats. Without good comparable examples like Howitt Close the significance of the Isokon flats cannot be fully understood.

In contrast to the well-publicised and dramatic history of the Isokon Building with its celebrity tenants – “Very few pre 1945 tenants do not have a Wikipedia entry” – Howitt Close has had a quiet history, and remarkably little has been written about it. It is understood that it was used as residential accommodation for civil servants at some point and further research may reveal an interesting story of this early example of inner city, partly communal living for the middle classes. Whilst the Isokon Building fell into an appalling state of disrepair and required total refurbishment, Howitt Close has remained in a reasonable state of repair over the past 90 years, partly because it lacks some of the structural design faults that contributed to the Isokon’s deterioration.

It is fair to say that Howitt Close, as a pleasing presence in its location, has been taken for granted over the best part of a century, at least until the threat to its architectural integrity posed by the current planning proposal. It is surely only a matter of time before this building becomes highly valued and rightly appreciated for its distinctive architecture and well-preserved authenticity, and achieves listed status – unless the proposed development succeeds in violating the block before then.

And what of the planning application? The development proposal generated over 100 objections, including from The Belsize Society, Belsize Conservation Area Advisory Committee (BCAAC) and the Twentieth Century Society, and no expressions of support. As at April 2022 we still await a decision from Camden Planning Committee.

Note: the author continues researching the history of Howitt Close and welcomes information/reminiscences about the building and its occupants. She can be contacted via info@belsize.org.uk.