There had never been a project approaching the size and complexity of the London & Birmingham Railway (L&BR), the first railway authorised to extend into London as far as the New Road (now the Euston Road) for passenger services. Yet Robert Stephenson (1803-1859) was appointed engineer-in-chief for the whole line in September 1833, when not yet thirty.
END_OF_DOCUMENT_TOKEN_TO_BE_REPLACED

The drama series “Harlots” features Georgian London’s most valuable commercial activity – sex. Series one and two will be aired back to back on BBC Two from August. Significantly, Belsize had its own Harlots in the 18th century, and this fascinating story is told in the new book by David S Percy, The Harlots of Haverstock Hill.

The Harlots of Haverstock Hill is an account of the remarkable life of “Moll” King, an 18th century madam or brothel-keeper, an ambitious and opportunistic woman who rose from humble beginnings in the streets of London to become one of the first settlers in  Belsize Park. Moll became a wealthy landowner with several properties on Haverstock Hill in the days when there were no more than a handful of houses along this country road to Hampstead. Her legacy remains there to this day.

Bold and opportunistic, Moll King was a woman who mixed with harlots, courtesans and lords of the land, who was painted by Hogarth and defied the norms and restrictions of the day to pursue wealth and success on her own terms. This account of her life, written in part in the first person as she might have recorded it, includes new information and facts which have never before come to light regarding what happened to Moll King’s Belsize houses – especially her villa.

“Moll” King and her Belsize Houses by David S Percy, with a foreword by Dan Cruickshank, will be out on 1 September and available in all Daunt bookshops plus Waterstones, Hampstead, £10.99.

(The survey was funded by the Community Infrastructure Levy and Belsize Society was supported by Camden Council’s Air Quality Officers, to whom we owe our thanks. The coronavirus lockdown meant we could not hold the planned public meeting with Camden’s officers to discuss the survey results so instead Tom Parkes, Senior Air Quality Officer, kindly responded to questions submitted by the volunteers and you can find responses here. ) END_OF_DOCUMENT_TOKEN_TO_BE_REPLACED 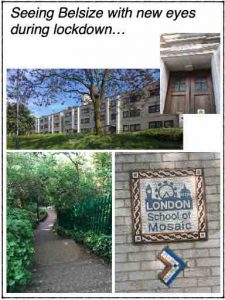 We asked writer and philosopher Alain de Botton for something to inspire us in these difficult and unusual times.

At some point in the 1650s, the French philosopher and mathematician Blaise Pascal jotted down one of the most counterintuitive aphorisms of all time: ‘The sole cause of man’s unhappiness is that he cannot stay quietly in his room.’

Really? Surely having to stay quietly in one’s room must be the beginning of a particularly evolved kind of psychological torture? What could be more opposed to the human spirit than to have to inhabit four walls when, potentially, there would be a whole planet to explore?

And yet Pascal’s idea usefully challenges one of our most cherished beliefs: that we must always go to new places in order to feel and discover new and worthwhile things. What if, in fact, there were already a treasury inside us? What if we had within our own brains already accumulated a sufficient number of awe-inspiring, calming and interesting experiences to last us ten lifetimes? What if our real problem was not so much that we are not allowed to go anywhere – but that we don’t how to make the most of what is already to hand? END_OF_DOCUMENT_TOKEN_TO_BE_REPLACED

We asked Belsize poet Robert Ilson for some reflective words in the age of lockdown. Here is what he sent us (originally published in Ham & High in April). 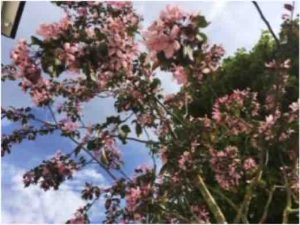 If you step into the World today
Remember to use your eyes
To grasp the myriad shapes and hues
Of earth and trees and skies
And should you in a thoroughfare
See someone smile at you
Recall that to return a smile
Is perfectly legal too
And when your path brings you back home
Your freshened memory
Will keep you in good spirits till
We’re all at liberty!