The Belsize Residents Association grew out of a campaign in the late 1960s and early 1970s to stop the area being split in two by a motorway. The proposed “London Motorway Box” would have cut through Belsize Square towards Chalk Farm. Local residents organised a vigorous campaign which helped to get the scheme dropped. In 1971 they set up the Three Roads Association which combined with other local groups to become the Belsize Residents Association.

During the 1970s BRA initiated several local campaigns. We opposed a road network scheme to create a maze of no-go streets to channel traffic down a few residential roads. Instead we proposed environmental improvements to Belsize village without road closures. These proposals were mainly accepted.

In the mid 1970s BRA helped to set up the Belpark Housing Co-operative to provide affordable housing for local people in need. Through Belpark, BRA worked with squatters occupying 104 -110 Haverstock Hill to stop these houses being demolished and restore them as housing for single people. 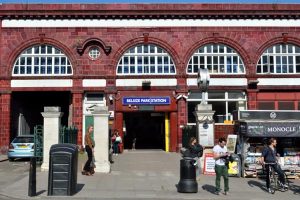 In the late 1980s and 90s some significant local buildings were at risk. The Association was very active in the successful campaign to restore the Town Hall for community use and have supported the St Stephen’s Church Trust in its restoration project.

Pressure on parking and road congestion have kept traffic issues high on the agenda. Having surveyed local resident’s views, BRA supported the introduction of parking controls, a 20 mph speed limit and improved pedestrian crossing on the main roads. BRA proposals in 2003, that the school run should be addressed by requiring all schools to produce green travel plans, were largely accepted by Camden.

A long-running BRA campaign to eliminate estate agent boards from the Belsize Conservation Area finally resulted in a ban in 2006 and in 2010, our campaign for the introduction of Article 4 directions, see here, to help preserve the distinctive character of the conservation area succeeded.

The BRA campaigned successfully to keep the Belsize Library open in 1987, 1988, 1991 and 2000. When Camden Council decided to stop funding the Library the BRA supported the Winch when it took over in 2012 and continued working closely with them and the Friends of Belsize Library to maintain it as a local amenity.

Despite the best efforts of BRA, post offices in Haverstock Hill, Belsize Village and England’s Lane all closed, but there was good news in 2010 when a new sub post office opened in Thornton’s Budgens. The Association also campaigned, if unsuccessfully, to save the local police station and continues to keep in contact with the local safer neighbourhood team.