Modern Belsize includes the Belsize estate and the northern part of the Chalcots estate. Belsize, or Bel Assis in old French, means beautifully situated. The Manor of Belsize, a subdivision of the Manor of Hampstead, was left to the monks of Westminster in 1317. In modern terms, the estate extended from Rosslyn Hill to England’s Lane and College crescent to Haverstock Hill, with additional land in the east extending to Parliament Hill.

By the middle of the 16th century, the estate consisted of farms and a manor house. Belsize House was rebuilt in 1663 in the restoration style.,  In 1720 it opened as a pleasure garden with concerts, dancing, fishing, hunting and racing. The Prince of Wales visited there in 1721 but in 1722 the magistrates acted to prevent unlawful gaming and rioting. Events continued in the park until 1745. Belsize House was rebuilt in 1746 and 1812. By then other country houses had been built around Haverstock Hill for wealthy London merchants. 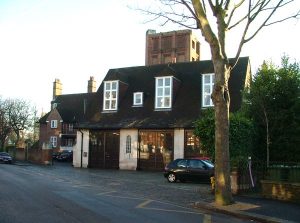 The Crown granted Eton College the Manor of Chalcots in 1449. It was farmed from Upper and Lower Chalcots farms. In modern times the estate extended from England’s Lane to Regents Park Road and Haverstock Hill to Swiss Cottage. Eton College first advertised land for development in 1829.

From 1815 mansions, villas and terraces were built for gentlemen commuters on the west side of Haverstock Hill. In the 1840s semi-detached villas of the “school of John Nash” were built around Provost Road and Eton Road. Adelaide Road was developed to link Haverstock Hill and the new Finchley Road between 1830 and 1853.

In 1853 Belsize House was demolished and the area around Belsize Square was developed. In the late 1850s and 1860s, Daniel Tidey built classical semi-detached houses with large porticos and lavish stucco to attract the wealthy middle classes. After 1870 stucco gradually disappeared. In the 1880s Willett introduced elaborate Queen Anne style red brick houses to Eton Avenue.

By the late 1880s, large leasehold houses were less popular although Willett overcame competition from the outer suburbs by building more suburban style houses. The trend for apartment blocks had arrived with Manor Mansion in Belsize Grove in 1884. Smaller houses were built round Glenilla Road in the 1900s to attract clerks. By then Belsize had been transformed from farm land and country mansions to a pleasant leafy suburb.

Read more about the history of Belsize here.

There have been many notable residents in Belsize, some of whom are listed here.