Tucked away between Parkhill Road and St Dominic’s Priory are the Mall Studios.  It was here in the 1930s that a “nest of gentle artists” pioneered the British Modernist movement. 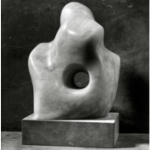 In 1927 the sculptor Barbara Hepworth and her husband moved into studio no 7.  Barbara had studied at Leeds School of Art and the Royal College with Henry Moore, so in 1929 when Henry, and his new wife Irina, were looking for somewhere to live, Barbara suggested that they rent a studio and flat at 11a Parkhill Road.

In September 1931 Barbara Hepworth fell in love with artist Ben Nicholson whilst on holiday with the Moores and other friends.  Barbara returned to London to ask her husband for a divorce.  Ben announced to his wife that he was leaving her and their three children, although he continued to visit them frequently.  Soon after, Ben moved into the Mall Studios with Barbara.

The 1930s were particularly productive for all three artists.  Hepworth’s and Moore’s work became increasingly abstract.  In 1931 Hepworth first pierced a hole in a sculpture and after that, revealing the interior space became a central motif for them both.  Moore later suggested that the hole “can itself have as much shape-meaning as a solid mass”.

In 1932 Ben Nicholson’s wife moved with the children to Paris and whilst visiting them, Ben met Braque, Brancusi, Picasso and Mondrian.  Under their influences he developed his distinctive white wooden reliefs on different planes.

In the early 1930s Herbert Read, a well-established art writer and critic, became a strong exponent of Moore’s and Hepworth’s work.  After leaving his family and job in Edinburgh he settled, with his new partner “Ludo”, at 3 Mall Studios in 1934.   Herbert and Ludo enjoyed hosting parties and became the social glue of the Modernist movement by bringing together people of different ages and nationalities.  Ben Nicholson later said that no-one who hadn’t lived in Mall Studios could understand the excitement of the new ideas generated there.  Herbert Read provided a public voice for the artists as they rejected figurative art and negotiated around Surrealism and abstract-constructivism to shape British Modernism. 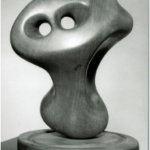 The discussions were enriched by the arrival of eminent European refugees. Walter Gropius, the architect who set up the Bauhaus School in Germany, fled to England with his wife in 1934.  They were invited to live in the new cutting-edge Modernist flats in Lawn Road, (now known as Isokon), around the corner from the Mall Studios.  Other Bauhaus teachers, including architect Marcel Breuer and the Hungarian artist Laslo Moholy-Nagy were also given refuge there and became frequent visitors to the Reads’ soirees.  It was hoped to establish a British Bauhaus, but it never happened.  When Piet Mondrian arrived from Paris in 1938, Ben Nicholson found him a room in Parkhill Road overlooking the Mall Studios.  He had his walls painted white and added patches of primary colours, reminiscent of his grid paintings.  The British Modernists saw his work as the logical conclusion of abstract art. 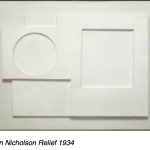 Herbert Read believed the foreign artists came to this area because the way had been prepared for them.  Hepworth said that they made England seem suddenly “alive and rich”. For a few years it seemed that London was becoming the international centre of Modernist art, but with the threat of war the “nest of gentle artists” dispersed.  The British artists moved out of London whilst the refugees travelled on to the States, which later became the Modernist art centre.  Read said: “Such a feeling of unanimity was never to exist again after the war, but English art had come of age.  Within the next decade it was to become, what it had not been for more than a century, an art of international significance.”

Averil will lead our autumn walk on “Artists, Refugees and Spies” which will include more about the artists living around Parkhill Road in the 1930s.  An article about local spies will appear in the August edition of the newsletter.