As we celebrate 50 years since the first few residents came together to form an association for people living and working in Belsize Park, we look back on community walks by and for our residents.

In September 1998, BRA luminary Mary Shenai led a walk in Belsize Lane with the theme of “Standing in History”.  At that time, there had been changes in the Village.  Mary’s view was that those changes should make residents realise that they were part of a continuing process, standing in history, and that it was appropriate to look back during the walk at how Belsize had become what it is today.  All future walks looked both at the past and at the present – reflecting Belsize as a place that has evolved and not atrophied.

In October 1999, Mary led a walk about the Eton Estate with notes written by Robin Woolven and in 2000 her walk focused on the architecture of Eton Avenue.  She described Eton Avenue as a “street of startling variety” when compared with the uniform stucco classical houses of Belsize built before the 1880s.  Eton Avenue is recorded as completely built up and numbered by 1903.  Mary observed that its houses were not designed by leading architects.  They are houses built in the prevailing style of their age by a far-sighted and imaginative developer, William Willett, using his own architects, Harry Measures and Amos Faulkner. 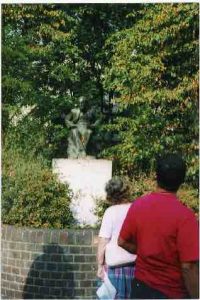 In October 2001, Mary’s walk centred on Lyndhurst Road.  She said: “We need to get our imaginations to sweep away everything you see here today…none of these houses, no roads, no Fitzjohns Avenue, no Akenside Road, no Lyndhurst Road, only fields and one large house in its grounds”.  This was Rosslyn House (previously known as Shelford Lodge and before that as Grove House).  The most famous resident of Rosslyn House was Alexander Wedderburn, 1st Earl of Rosslyn (1733 – 1805).  He became Lord Loughborough in 1780 and Lord High Chancellor in later years.  Members will know Wedderburn Road.  Other roads in NW3 named after Lord Chancellors are Eldon Road and Thurlow Road – as well as Lyndhurst Road itself which is named after John Copley, 1st Baron Lyndhurst, who is buried in Highgate Cemetery.

In September 2002, Mary’s walk was “Hayfields to Horizontal Windows: A Walk through England’s Lane”.  The name England’s Lane derives from an eighteenth century tenant farmer James England but Mary was keen to point out more modern buildings, such as Stanbury Court at the end of the Lane with its “horizontal paned windows wider than they are long, smooth white surfaces, rounded corners and flat roofs” making a “handsome building in a style uniquely of the twentieth century”.

The walk in 2003 concentrated on the left side of Belsize Lane going west towards Fitzjohns Avenue, and Daleham Gardens.  In 2004, the walk took in Belsize Park Gardens, Glenilla Road, Belsize Avenue and Belsize Square, ending with tea in St Peter’s Church.  The Church’s vicarage in the middle of the Square was sold to the New Liberal Jewish Community in 1947 who renovated it and commissioned a new synagogue by the Bauhaus trained architect H.W. Reisenberg.  A new hall was added in 1973.  Mary noted that the synagogue’s “symbolic gates proudly reveal its identity”.

In Autumn 2005, Mary led the walk with Gordon Maclean, talking about “Eton Avenue, Ancient and Modern”.  They noted the new Hampstead Theatre – opened two years previously and replacing an older prefabricated building near the Basil Spence library.   The theatre building was “one of the best new theatre buildings in England” with a glass and timber louvred skin surrounding a free-form 250 seat theatre.

Mary’s final walk took place in 2006, with “Belsize and Eton” as its subject.  She conducted the walk with Aileen Hammond who had an abundance of knowledge about Haverstock Hill.  Aileen spoke with affection about how “Haverstock Hill itself retains a slightly scruffier image – or at least we like to think so!  But Karl Marx who, we learn from Streets of Belsize, actually lived just round the corner in Maitland Park Road from 1864-75, always gave his address as Haverstock Hill.  When writing to his friend Engels he justified his rather lavish lifestyle by saying it would improve his daughters’ prospects in life.  Be that as it may, rumours are afoot that even ‘The Etons’ [Eton Road, Eton Villas, Provost Road and Eton College Road] have lost their most raffish residents – the cockroaches that gave such a warm, scurrying welcome to 1960s residents when they came home after dark and put on the lights.” How times have changed – and all the more reason to recall Mary’s words that we are standing in history.

More recent historical walls were led by Averil Nottage and Aileen Hammond.  BelSoc plans to revive the annual walk – subject to any ongoing concerns about Covid.