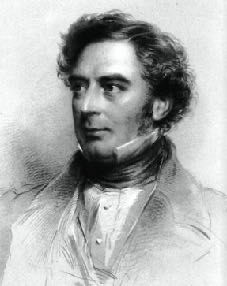 There had never been a project approaching the size and complexity of the London & Birmingham Railway (L&BR), the first railway authorised to extend into London as far as the New Road (now the Euston Road) for passenger services. Yet Robert Stephenson (1803-1859) was appointed engineer-in-chief for the whole line in September 1833, when not yet thirty.

He spent the next ten years working for the L&BR, living first in Downshire Hill in Hampstead, and then from 1834 to 1843 at 5 Devonshire Place, one of a pair of semi-detached villas on the west side of Haverstock Hill, close to the corner with Belsize Grove. The house had a stable attached (out of view to the left of the photograph of 1903) where a groom, a carriage, a phaeton for his wife and one or two horses were accommodated. The photo (CLSAC) shows part of the turning circle in front of the house. The site is now part of the modern block of flats called Romney Court.

His wife Fanny, whom he married in 1829, died childless in 1842 and is buried in the cemetery of St John’s, Hampstead, the church where they worshipped. Robert is buried in Westminster Abbey beside Thomas Telford, another highly distinguished civil engineer.

He was not only the Chief Engineer for the L&BR, establishing the construction technology for the railway age: he also took personal responsibility for the Primrose Hill contract, the first nine miles from Camden Town. This most difficult section of line, including Primrose Hill Tunnel and cutting, had driven the appointed contractor into bankruptcy after problems with ground conditions, particularly the swelling of blue London Clay exposed to the atmosphere. Stephenson must have walked this section of line innumerable times while supervising the direct labour he employed to replace the contractor’s workforce.

The opening of passenger services from Euston in 1837 signalled the decline of longer distance commuting by road. But the stimulus for construction of the L&BR was goods traffic, a competitive threat to which the Regent’s Canal Company responded by insisting that railways take goods traffic no further into London than the canal. Camden Goods Station was therefore built adjacent to the Hampstead Road alongside the Regent’s Canal and rapidly developed into an important interchange depot.

Both the mainline railway and the former goods depot have left a remarkable heritage, with which Camden Railway Heritage Trust (CRHT) has been involved for 15 years. Primrose Hill Tunnel east portals and the stationary winding engine vaults, both works by Robert Stephenson dating from 1837, have joined the Roundhouse as Grade II* listed structures. They form part of the Camden Railway Heritage Trail described on the CRHT website and in a pocket trail guide. It was the focus of a BRA walk in 2008. The railway heritage trail can also be found on the Belsize Society website.

The former goods depot, re-designated as the Chalk Farm Railway Lands, is an area in flux, with greatly intensified commercial and residential developments approved for the Morrisons site and proposals in the pipeline for the adjoining Juniper Crescent and Gilbey’s Yard. Reconfiguring the former railway lands creates a unique opportunity for new through routes that serve the wider community and provide planning coherence across these diverse developments.

Foremost among such routes is Stephenson Walk, a proposal CRHT has long espoused. The Walk extends from Oval Road and the Regent’s Canal towpath to Regent’s Park Road bridge, with a possible extension to Primrose Hill Road. It creates new links between communities as well as providing access to the heritage facilities along the Walk, notably the Winding Engine Vaults and, at a later stage, the Primrose Hill Tunnel east portals. The Walk will provide car-free through routes for pedestrians, cyclists and wheelchair users.

Despite his long and fruitful association with the area, and the major monuments he has left us, Robert Stephenson is virtually uncelebrated in this part of Camden. The Stephenson Walk will correct this oversight. It will not only reconnect the public to the area’s history but foster acivic pride that will offset the sense of loss that urban intensification can engender.