I’ll tell you one more thing. I got more songs in my head than I ever told you. I got enough to sing for days…

Readers may well have seen Nell Leyshon’s play Folk at Hampstead Downstairs. Louie and Lucy are sisters whose mother has recently died. They live in South Somerset and make just enough to live on as glovemakers. The two sisters have been handed down an abundance of songs which they know by heart and which they sing in homage to the traditional rural life to which they feel bound. The songs are an inheritance from their mother and help them to temper their grief and reflect on their loss.

When Louie takes a job as a maid in a large house, she meets Cecil Sharp who has come to Somerset to record folk songs. Louie sings to him and he writes down the songs which are published. Louie regards the publication as a betrayal: the songs are not commodities but part of the very essence of the community which owns them and passes them down. The physical act of singing is an emotional reflection of the fields, gates and landscapes of the countryside. Better to lose the songs than to tie them into a world that excludes those who are their true guardians. 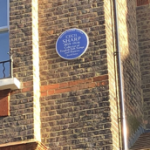 A play about Cecil Sharp (1859-1924) has a special resonance for Belsize residents. In 1896, he was appointed as the Principal of the Hampstead Conservatoire of Music at 64 Eton Avenue. The building was later the Embassy Theatre and is now part of the Royal Central School of Speech and Drama – right opposite the Hampstead Theatre. The Principal’s job came with a house: Sharp lived in Maresfield Gardens as marked today by an English Heritage Blue Plaque. Sharp stood down as the Principal in 1905 to concentrate on collecting folk songs. His life and work is now celebrated at Cecil Sharp House at 2 Regent’s Park Road in Primrose Hill. He died at his home in Hampstead and is buried in Golders Green Cemetery.

Louie and Lucy are based on real women: Louisa Hooper (1860-1946) and Lucy White (1849-1923). Sharp collected songs from them in 1903. The play includes ever-more evocative singing, dancing and piano playing from its small, multi-talented cast. Louie is played by Mariam Haque whose voice is a real treat.