It was with sadness that BelSoc learned of Aileen Hammond’s death on 19 February.  A much-respected councillor for Belsize, a much-loved member of BRA and BelSoc, and a generous and selfless person, she will be very greatly missed.

My friend Aileen was clever, and witty, and kind, and energetic. Described by one friend as a force of nature, she never wasted a minute of her life. Aileen was a news addict and a compulsive letter writer. She had trenchant views – about transport, climate change, education and, of course, banks that won’t let you speak to a real person. 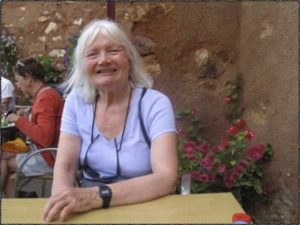 She needed to be fully engaged in the debate, and to put her point across, whatever anyone else thought. So much so that she was even prepared to overcome her distaste for computers – by learning to make peace with Zoom.

Her dogged commitment to the people and causes she cared about is legendary. On the social front, Aileen was a brilliant and thoughtful friend – always there with interesting things to talk about, especially when someone was in need of comfort or cheering up.

I first met her 20-odd years ago at a weekly movement-to-music class, then held in Haverstock School, round the corner from Aileen’s flat in Chalk Farm. I won’t comment on how graceful or otherwise either of us were but Aileen always put every ounce of energy into it. And we continued putting our best feet forward together until our teacher left London in recent years.

She had a love of classic detective fiction, visits to Hampstead Theatre, and long walks on the Heath, talking about everything under the sun. Aileen was clearly very intelligent, studious, widely read and politically engaged, but modest with it. She turned out to have an encyclopaedic in-depth knowledge of everything from the history of our local area to Latin verse translation and classical music.

A Proms-goer from her South London schooldays onwards, she loved the Ode to Joy and the works of Bach. But she also got a kick out of the Kinks, and many other 20th century sounds.

Aileen had been interested in Isambard Kingdom Brunel since her Bristol University days, so the idea of an outing to explore his London connections appealed to her. It turned out to be a trip down memory lane, courtesy of a lunchtime visit to the Blacksmith’s Arms in Rotherhithe – where she was proud to tell me that this delightful pub had been run, back in the day, by her uncle Wally.

Aileen was a connoisseur of eating and drinking in good company, always appropriately turned out – in her signature Hampstead Bazaar wide-leg trousers and long cardigans. The most important item on the menu? Long deep conversations with interesting people, spiced with alcohol and laughter. Not everyone agreed with her carefully thought-through and strongly-held views, but that didn’t bother her. Like-minded people were fun to talk with, but a good argument would do nicely, too.

She was full of surprises.  Not many people may know that she belonged to the Bristol University climbing club and regularly went skiing in the Spanish Pyrenees with a group of Hampstead friends. And she loved the history of Belsize, creating a walk for the Belsize Residents Association as well as supporting the Association in many other ways.

Aileen was brave to the last. We will all miss her for so many things, not least her enthusiasm for making her garden grow, and for sharing it with friends and neighbours. One of the last things she did at the end of 2020 was to plant dozens of bulbs, many of which are now in flower.