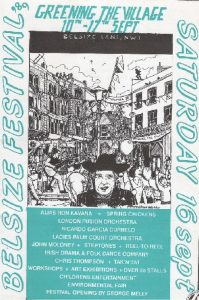 The sketch for the cover of the 1989 programme showed a Belsize village filled with festival-goers.

The Village has formed a focus of local activity of many kinds over the years.  Developed in the nineteenth century by William Willett, he gave up land in order to open up a triangular village green See “Streets of Belsize”, Camden History Society.

Did you know that for many years Belsize Village hosted the Belsize Festival?  Organised by local people, and supported by the Belsize Residents Association, the Festival was held for the first time in September 1974 with Belsize Lane closed to traffic.

The picture of the Village which you see on this page was drawn by Matthew Bell and was part of the cover of the 1989 Belsize Festival programme.  The Festival ran from 10-17 September.   The theme of the Festival was “Greening the Village”, reflecting the interest of Belsize residents in the environment which continues to this day.  The main day of the festival was Saturday 16 September.  George Melly opened the day and Belsize resident Ken Ellis was the MC.  Musical events took place in (among other places) the Village and St Peter’s Church.  There was a grand fancy dress parade, a toy and book market, and roundabout and inflatable castle.

The programme – which is now part of the BelSoc archive – says that Mr Newman “will be there as usual with his donkeys.”  The Festival raised money for St Joseph’s Hospice in Hackney, the Simon Community and the London Wildlife Trust.   The BRA itself contributed £39.11 to these charities from cake sales – showing that the tradition of Belsize cakes is a long one.  The BRA organised a ceremony to hand over cheques to the charities.

This was the Festival’s final year.  In 1987, the Festival was rounded off by Lord Eric Sugmugu and his Band in the rain.  After rain affected the 1988 and 1989 festivals, enthusiasm waned and the BRA Committee decided not to initiate it again.