Through fifty years, we have commented on numerous developments, participated in campaigns and sought to improve or at least maintain the essential character of the area. 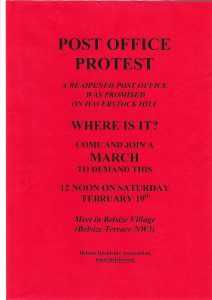 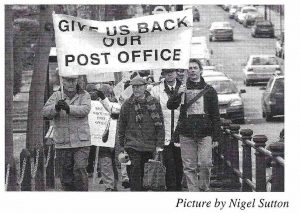 There was considerable opposition, with the Belsize Residents Association making its case to the Council and to the Post Office as it consulted about closures. The BRA Chair, Handley Stevens, is captured in the newspapers with the then MP Glenda Jackson relating concerns. There was a BRA and Belsize Conservation Area Advisory Committee march on 19 February 2005, in which 150 people walked from the Village to the Haverstock Hill post office. It was a “bitterly cold day”, but over the two hours, nearly 500 signatures were added to a petition. It did work: the Belsize Village post office was maintained until 2006, responding to the strength of residents’ feelings and gaining three extra years.

In the archived material, already in 2005, the Association had begun to propose putting a post office in Haverstock Hill Budgens. A Post Office Consultation Manager introduces BRA to a Post Office Network Change Manager who thought the idea was worth investigating. Things go quiet until October 2010, when the BRA Newsletter celebrates the opening of a post office counter in Thornton’s Budgens with a poem.

As BRA members marched to save post offices, they had reason to celebrate a different successful campaign. Since the mid-1980s, estate agent boards had been banned in neighbouring conservations areas: Hampstead Village, South Hill Park and Swiss Cottage. It was only through a long, 20 year campaign that the BRA received approval in 2005 for the ban to extend to the Belsize Conservation Area, alongside Fitzjohns/Netherhall and Reddington/Frognal CAs.

There had been some hope that this change would occur earlier. In 1994, a vote at Camden Council went against the ban only through the chair’s casting vote. There were also some legal successes to control estate agents that were breaching the regulations for boards. In 2000, the complaints made by the Association about agents who put up bogus for sale/rent boards, as a form of advertising, led to successful prosecutions that achieved media coverage.

As the ban came into force, in March, the Association was also on the frontline to enforce the changes. The BRA conducted a door-to-door survey recording all visible estate agent boards. Boards that were in place before the ban could remain there until the property was sold and the audit provided a means to identify new boards. The survey indicates where we might have been today: records show that 12 estate agent boards adorned Belsize Square and 16 in Fellows Road. The steps taken in the conversation areas have now led to a Camden-wide ban on boards.

The Association’s archives are full of examples where, over 50 years, the BRA and BelSoc have been active in shaping Belsize.The routine work of comments made on planning applications, complaints about breaches and responses to consultations stretches across five lever arch files making an impact in enhancing and maintaining the Belsize area.