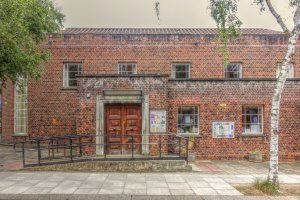 Thanks to Zoom, the Friends of Belsize Community Library have managed to continue with their monthly library talks since September.

Stephen Duncan, the son of Beata (Susanna) Duncan, spoke about his mother’s early life in Germany during the turmoil of Weimar Berlin and read from her poetry collection Berlin Blues (Green Bottle Press) reflecting that period . Beata also wrote poems about her life during the London blitz in Breaking Glass (WriteSideLeft.) Beata was a long time resident of Belsize Park and a strong supporter and campaigner for Belsize Library.

Tudor Allen, the archivist, took us on a historical tour of Swiss Cottage and we saw some of the enormous changes that took place during the twentieth century.

Karin Fernald, the actor, writer and performer described and illustrated how Englishwomen such as Mary Wollstonecraft, who were critical of their own society, crossed the Channel early in the French Revolution with high hopes. We saw paintings, portraits and caricatures by French and English artists.

The actors Colin Pinney and Noelle Rimmington performed the story of Ted Hughes and Sylvia Plath using the couple’s own words to show their marriage and its conflicting passions.

The talks are held on the third Thursday of each month at 7.30 and we have the following planned.

February 18  Laura Spinney, the writer and science journalist will talk on “Pandemics old and new: parallels between the ‘Spanish’  flu of 1918 and Covid-19”:
March 18 Josh Levine, who worked on the script of Dunkirk (topic to be agreed)