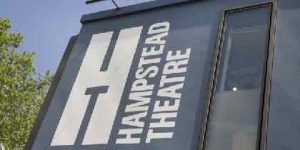 At long last, after having to shelve performances last year, Hampstead Theatre has been able to give us a series of productions that challenge and inspire. The Death of a Black Man, by Alfred Fagon (1937-1986), received its world premiere at Hampstead in 1975. The revival in the main theatre shocked and entertained in equal measure. Set in a flat on the King’s Road, the play centres on the lives of two black men and a black woman seeking to make their way in the world. The male characters evoke sympathy then suspicion and then horror as they exploit the woman with tragic consequences. The small cast (Nickcolia King-N’da, Toyin Omari-Kinch and Natalie Simpson) gave vibrant, pacy performances. Ably directed by Dawn Walton, the set oused 1970s kitsch. As some of the press reviews pointed out, the anti-racist themes would not be presented in the same way nowadays and some of the dialogue would indeed be controversial in its own right. Nevertheless, the radical force of Fagon’s writing made this a stand-out experience to watch and listen to.

Downstairs, Deborah Bruce’s Raya had a cast of four and a small audience but was engrossing. Roxana Silbert’s direction made a bare stage with a few colourless props feel like we were sitting in the downstairs floor of a house, where a man and a woman end up after a university reunion. Each presents to the other (and to the audience) with one façade but all is not what it seems. As the plot develops, the audience learns that neither has the life that they contemplated at university. Each has a personal tragedy which they mask by deception or by revealing less than the truth. The audience is itself duped – presented initially with a trivial meeting of two old friends but becoming, gradually, engrossed in their all too human problems. The play depicts two sympathetic characters doing their best in a tough world.

For reasons set out in the brilliant programme notes, Hampstead was in 1967 the venue for the premiere of Tennessee Williams’ The Two Character Play. A play within a play, Kate O’Flynn and Zubin Varla play a brother and sister who in turn play a brother and sister trapped in fear and confusion in the family home after the death of their parents. Directed by Sam Yates, the stage within a stage makes the action cramped, the only freedom in the entire production being provided by care-free dances which are elegantly executed by the two excellent actors. The dialogue is in the style of theatre of the absurd. The plot lines are inconclusive, life being a never-ending drama. This is not an easy night out, but worth the effort.