On 4 November, we celebrated our 50th anniversary with a very special event, hosted at the Belsize Community Library. David Percy presented his illustrated production about Moll King’s Belsize Houses. It was our first indoor event for many months: it was wonderful to see our members face-to-face again and within Belsize Library. 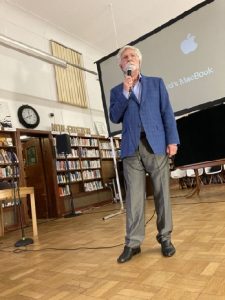 Projected onto a big screen, David’s production is a mix of historical analysis and images with a series of readings from David’s book “The Harlots of Haversack Hill”. It starts with the early origins of Moll King as she begins to develop her businesses including running houses of disrepute. The story of Moll is brought to life, most vividly by a series of readings by Dame Janet Suzman from the text of David’s book.

The presentation charts decades and centuries of a part of Belsize, the stretch of Haversack Hill as it climbs towards Hampstead, particularly between Chalk Farm and Belsize Avenue. The film’s careful consideration of the history of the area, drawing in the evidence from maps, paintings and photographs, is as strong as David’s past studies of Belsize history. By focusing in on the changes in Haverstock Hill, the production has a different richness, introducing us to the cluster of buildings (Dawsons Villa, Field Cottage), and to a history of the people (Tom King, Moll’s son, through to to the modern owners).

In questions after the screening, David explained how the production was a development of his book, and his own pleasure at seeing the character of Moll King voiced so perfectly by Dame Janet Suzman.

After the event, wine and nibbles were served. We were treated to a speech by our former chairwoman Averil Nottage who gave us a poignant history of BelSoc and its predecessors over the years. 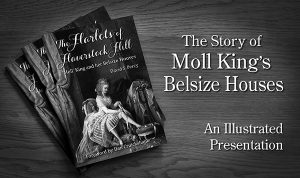 David Percy’s presentation will be available to stream online over the seasonal period, in case you would like to see this excellent presentation again or were unable to go to the recent screening. David has kindly allowed his illustrated production to be available for a limited period, streaming from 20 December to 6 January. We’ll email the details and provide links online nearer the time.