We know we live in a leafy part of the city, with Primrose Hill and the Heath attracting countless Londoners to relax attracted by these green spaces. However, a recent research project has placed Camden in the top 20 places in England and Wales with the most tree cover. Gardens, tree-lined streets as well as the parks, place our Borough ahead of rural areas, which the study finds have the least tree coverage, including parts of the Lake District and the Yorkshire Dales. 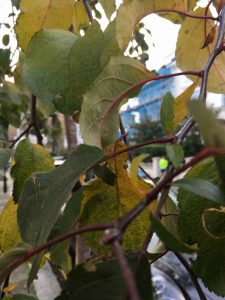 detect trees, finding around 400 million in England and Wales. They report that almost a third of Camden is covered in trees, with the northern portion of Hampstead Heath being the most verdant and the Kings Cross areas and the Borough south of Euston Road being least. Belsize is a sea of green with the roads being discernible.

Looking at trees from above provides a valuable story about the nation’s greenery but for many of us the pleasure is through walking around our area and seeing trees in their setting or enjoying relaxing in the open spaces. The Council has released data about our trees, very much at ground level. Its list of Council-managed trees, mapped at the site https://www.camden.gov.uk/trees, corroborates the results of the study, listing over twenty thousand trees in the Borough. This total excludes those on the Health and in the Royal Parks.

Also, the list highlights the importance of environmental impacts, recording the carbon stored in each tree and the amount of carbon and pollution captured each year. A copper beech tree in St John’s cemetery (which you may see on the walk described in this Newsletter) stores the most carbon (6 tonnes) across the two wards of Fitzjohn’s and Frognal and Belsize; the London planes on Belsize Avenue are storing slightly less but head the list for that ward. The plane trees lining Eton Avenue, Fitzjohn’s Avenue as well as Belsize Avenue are important in removing pollution with the data indicating each tree – and there are over a hundred in the area – removes around a kilogram of pollution each year.

In our Newsletter article in May, we highlighted some of the notable trees of the area. These are documented in Camden’s list, allowing you to locate both the mature examples recommended in the Newsletter and to see the newer plantings. Further, that article indicated some website applications available to guide you around Belsize and see some of our best trees (you can put your postcode into the treetalk.co.uk website which will design a walk for you).

Originally, Stanley Gardens was named after a Dean of Westminster of that name, the Deans being landowners here. At one time, it was used by Hampstead Cricket Club. The houses of Stanley Gardens were built in the 1880s.

The garden was acquired by Hampstead Borough Council in 1920, the name changing to Primrose Gardens in 1939. The garden consists of two railed enclosures with grass and trees with a small central paved seating area between. All the trees in the garden are documented in the council’s list. A pair of beech trees (Fagus sylvatica ‘Purpurea’) are central to the garden, their leaves colouring well through the winter. Three birch trees (Betula pubescens) are also in the garden, in their yellow autumn colour.

Facts from the tree register