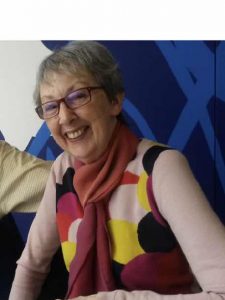 It is with considerable sadness that the Belsize Society has learnt of the death of Consuelo Phelan. Many members will remember her as a very longstanding committee member who especially loved and cared for the trees and plants of Belsize. She kept a very close eye on all planning applications related to trees, and it is certainly thanks to her efforts that some of our beautiful trees were spared the axe. Members also often saw her at the gates of the garden party or the AGM; she only stood down from the committee at the most recent AGM last March after many years of service.

Consuelo was born in Melbourne in 1938. Her Irish and English ancestors settled in Tasmania in the 1800s – the earliest being George Cartwright who arrived in Hobart in 1820 aged 21 as Hobart Town’s first lawyer. He found himself in a chaotic and violent new convict settlement. He eventually married the daughter of a female convict (children were sometimes allowed to travel with their mothers in appalling conditions).

Consuelo was educated at school and university in Melbourne, completing an Arts degree. She then began a teaching career in Melbourne, eventually sailing to Europe in 1967, where she furthered her French studies in Paris and then settled in Belsize Park and began teaching at what is now The Elizabeth Garrett Anderson Secondary School, specialising in English and French, until her retirement. At her funeral a former colleague and friend Oonagh O’Flynn described her as: “a superb teacher, a wonderful colleague and a curious and constantly developing human being with interests in so many areas of life beyond education” while other old friends described her quirky sense of humour and her love of literature and art.

She spoke of returning to live in Melbourne after her retirement, but ultimately chose to remain in Belsize Park, perhaps because of her easy access to London galleries and the frequent trips she made to other parts of Europe, especially France, accompanied by like-minded English and Australian friends.

When Consuelo realised she had little time left she chose privacy, declining offers of help. As she wished, she died peacefully at home at the end of May. Under lockdown conditions, attendance at her funeral was necessarily very limited, but Anne Stevens was present to represent the Belsize Society. She will be greatly missed.