The Belsize Walk was introduced in the early 2000’s by Camden and TfL, with significant input by local residents, as part of the “Walking Plan for London”. The walkways join two of London’s largest green spaces; Regent’s Park and Hampstead Heath and are marked by metal discs (right). The design of these discs is based on the metal coal-hole covers, used in the 19th and early 20th centuries with a London Plane leaf found on the route, being the decorative feature.

Early in the walk and slightly off route, is Primrose Hill (65 metres high) one of six statutory protected views of St Paul’s Cathedral and the walk terminates on another protected view, Parliament Hill (98 metres high). In between is a two and a half hour heritage walk of notable and varied architecture which passes through the Belsize Conservation Area, previously part of the Manor of Belsize which was extant in 1317. 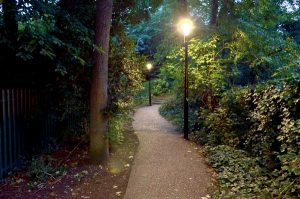 Find information about other walks here and for canal towpath walks, go here.

A Walk through the Blue Plaques of Belsize

If you’re about to take a quirky walk around the United Kingdom, you might plot the route to visit the 940 Blue Plaques adorning the faces of old buildings; historical markers commemorating a link between the location and a notable individual, event or former building on the site.
The common denominator connecting each person is death and the process of erecting a Blue Plaque will only be initiated after the person has been deceased for at least twenty years or has passed the centenary of their birth. The idea of a commemorative plaque scheme was first put to the House of Commons by William Ewart MP in 1863 and has played an important role in the history of the conservation movement. Today, English Heritage is responsible for Blue Plaque installations.
Belsize Park is home to a dozen or so plaques. These can be found by following the three mile circuit described in this guide and map

Did you know that you can: